How Does Cannabis Work?

Home > Lifestyle > How Does Cannabis Work?

Have you wondered why you see claims that cannabis and its derivatives can be effective for many different ailments? Everything from psoriasis, pain management, MS, Alzheimers, Epilepsy, anxiety, depression, skin conditions, Autism, Irritable Bowel Syndrome, and more seem to be on the list.

How could one plant be effective for so many disparate conditions and illnesses?

Cannabis is an ancient plant, having evolved on the planet over 65 million years ago. Humans are known to have been cultivating it for at least 10,000 years, starting in the neolithic age. Since ancient times it has been used variably as an effective way to quell anxiety, depression, pain, seizures and more, and is now evolving as a medicine for many ailments and conditions. Despite this, and due to the fact that the plant has been prohibited for many years, modern scientists have had limited ability to study its effects, both positive and negative. Therefore, we have never quite understood how it works on the human body, until recently.

The Discovery of The Endocannabinoid System

It was only in 1964 that an Israeli scientist named Raphael Mechoulam was able to isolate THC and CBD, two major compounds of the plant. After this discovery, scientists were intrigued to understand how these compounds work on the human body. As they traced a backward path in trying to understand how the isolates work, they made a discovery of major importance — the Endocannabinoid System (ECS).

“By using a plant that has been around for thousands of years, we discovered a new physiological system of immense importance,” says Raphael Mechoulam, the dean of the transnational cannabinoid research community. “We wouldn’t have been able to get there if we had not looked at the plant.”

In fact, according to Dr. John McPartland, the ECS started evolving around 500 million years ago, when complex life was a simple sponge, well before the appearance of cannabis on the planet. The discovery of cannabis compounds led scientists to the discovery of this ancient system, and therefore it was dubbed the Endocannabinoid System.

How does The Endocannabinoid System Work?

The ECS is a signaling system that resides within our cells and within thousands of other biological lifeforms, basically everything on our planet with the exception of insects. While much is still unknown about this ancient system, we do know that our bodies are full of endocannabinoid receptors on our cells, and that it is responsible for maintaining homeostasis and many of our normal day-to-day functions.

Cell receptors are basically a set of locks, each with a set of corresponding keys which are chemical molecules called “agonists”. Each time an agonist is bound to a cell receptor it relays instructions that trigger essential bodily functions and patterns. The ECS is made up of two primary cell receptors. CB1 and CB2. Each of these receptors activate in different parts of our bodies.

CB1 receptors are found throughout the body, but mostly exist in the brain and spinal cord. They are concentrated in areas such as in the hypothalamus and regulate appetite, and the amygdala, which plays a role in memory and emotional processing. They are also found in nerve endings where they can help reduce pain sensations. Typically concentrated in immune cells and the peripheral nervous system, CB2 works to reduce inflammation as an immune response. 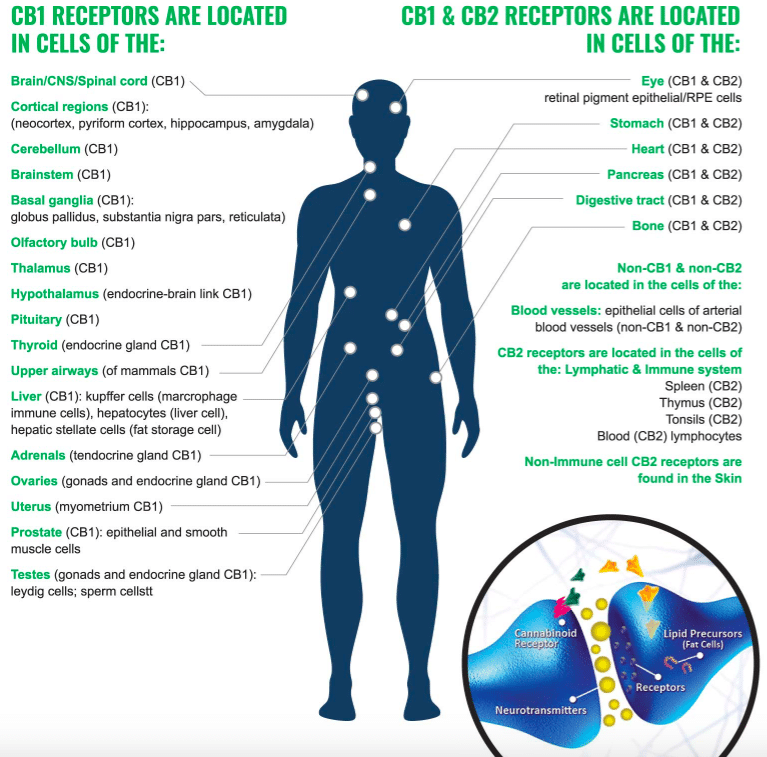 Cannabinoids and The Endocannabinoid System

We produce a natural cannabinoid called Anandamide which is only synthesized and delivered to our CB receptors when the body signals that it is required. Therefore scientists believe THC from external sources (cannabis) actually serve to activate the ECS, prompting it to work at a stronger and more productive rate than normal.

Typically the effects of THC are considered to be psychoactive, but the compound works far beyond getting you high. It is proven to help with chronic pain, nausea, appetite, asthma and glaucoma and has a symbiotic effect on the body when consumed with CBD.

Interestingly, CBD does not bind with a receptor. Instead, it works by inhibiting the enzyme FAAH which prevents and slows down the breakdown of the naturally occurring anandamide, thereby strengthening our own natural processes.

What we now know is that the Endocannabinoid System regulates the following basic functions:

We’re now discovering that our endocannabinoid system regulates many aspects of our well-being related to wellness and quality of life. We’re hopeful that by enabling scientists to research how cannabis can help regulate this system will lead to some critical discoveries in how to help people (and animals!) live long and much healthier lives.