Now that it’s federally legal for most Canadians to grow 4 cannabis plants on their property, our Alpha Woman gardeners and cannabis enthusiasts are looking for tips and tricks on how to grow their own. 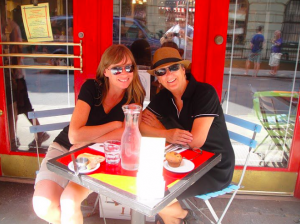 The author and her mother

Fortunately, we have an Alpha Woman in our community who has been growing cannabis on a personal scale for almost 50 years. She has agreed to let us follow her throughout the 2019 outdoor growing season from seed to pipe or cookie. That person is my mother, Brenda Andrachuk.

Currently in her 70’s, my mother enjoyed a very successful career in advertising in Toronto. Starting in the late 1960’s, she made her way in the world of media and advertising, eventually ending up as a Vice President at a company called Media Buying Services – first woman VP of course.

She was also the first woman chairman of the Association of Canadian Advertisers. Needless to say, she has always been a trailblazer, an unconventional woman who worked in a creative industry during (and after) the summer of love when cannabis was predicted to bring about meaningful social change.

My mother is also a person who grew up in a family ravaged by the excesses of alcohol.  Like many young people in the 60’s, rejecting the hard drinking ways of her parents’ generation was something she connected with. “I can’t really remember when, where or why I had my first toke. It was not an everyday thing; it was something that musicians and hippies got into. I just thought it was a pretty good idea, better than drinking alcohol, no hangover, no violence, lots of laughing”.

Growing In Her Mom’s Kitchen Garden 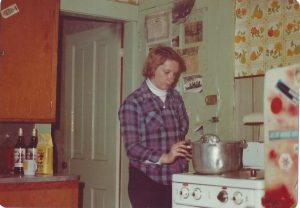 While my mother’s love of cannabis continued unabated through the decades, societal approaches and government regulations changed and evolved. In the early phases of her journey with cannabis, she dealt with the usual issues surrounding procuring the product. “The guy (it was always a guy) who brought the grass was usually a seedy, luckless, unreliable person. There was a lot of waiting, listening to music, phone calls trying to find the guy, rumours about busts. The waiting was mostly done in small dark places, tacky restaurants and bars or student-type apartments.

This quickly got old for my mother, so her thoughts turned to my grandmother’s gorgeous kitchen garden in Stayner, Ontario, ironically now the home of Peace Naturals. Her journey with growing cannabis started there, almost 50 years ago. 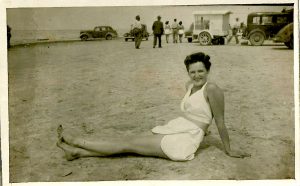 “Sometime in the early 70’s we decided to grow some weed in my mother’s wonderfully opulent garden that ran from just behind her house out to the small dead end street in back. I don’t remember actually germinating seeds, but it’s likely that I just shoved a seed into a pot with dirt and up came a female pot plant. We had 8 nice little plants. Male or female, we had no idea, much less the ability to tell the difference.  My mother, an inveterate gardener, was proud of our efforts so we planted them in the back row of her garden right after the May 24 weekend. By September those babies were over 6 feet tall and bushy.” 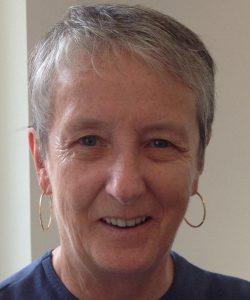 Her memories of those times are very vivid. For you see, my mother is a young and extremely healthy senior, despite (or perhaps aided by?) living a life that has included cannabis consumption. After a successful international career, she spends her time skiing, playing tennis, snowshoeing, hiking, and is spending the month of May in Paris.  Her favourite hobby however, might still be growing, curing and consuming her own cannabis. For the past 20 years, she’s been quietly going at it on her property on the shores of Georgian Bay.

As such, she’s become a master micro-cultivator, an OG senior with so much knowledge built up over the years that I asked her to share. Some mothers share their piecrust recipes; mine is sharing her experience with cannabis micro-cultivation. During this growing season she will be writing about and filming the details involved in germinating, growing, drying and trimming cannabis for home cultivators.

Stay tuned for her first installment: ‘In praise of the cannabis plant: size, shape, flexibility, ease of growing, and the many varieties of seeds for a gardener’s delight.’

Previous Article
Zamina Walji: You can’t write a playbook on cannabis if you don’t love it
Next Article
Melinda Rombouts; Canada’s Eve of Cannabis conquering the globe