It is no secret that Indigenous women have not always received the recognition they rightfully deserve. Although we cannot acknowledge every overlooked achievement, we can shine a light on a select few and get the conversation started. This article features strong, inspirational, Indigenous women that demonstrated remarkable leadership in their lifetimes. These women were trailblazers and they did not let racism or misogyny stop them from doing what they were passionate about. They faced more obstacles than most, but their commitment and drive led them to achieve impressive feats. These are the women you should have been learning about in history class. 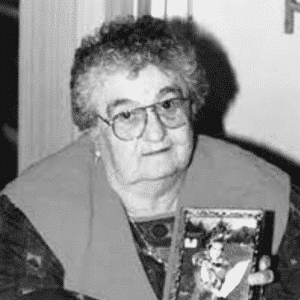 Elsie Marie Knott was the first female First Nations Chief in Canada. She was elected at the age of 33, three years after the Indian Act was amended to allow women to hold positions in band governments. She served a total of 7 terms from 1954-1962, and again from 1970 to 1976, and used her time as chief to improve her reserve. She obtained federal funds to build houses and infrastructure, dig wells, and upgrade roads.

Outside of her political career, she was also a strong supporter of education. When she was in school, the use of her native language was prohibited. This served as motivation for her dedication to preserving the Ojibwe language. She helped start a language program at the Curve Lake First Nation School, taught weekly Ojibwe language classes, and visited prisons to teach Ojibwe to inmates. She also created the Knott Bus Service, which allowed children on the reserve to further their education by removing the barrier of transportation.

She was also passionate about preserving Indigenous culture and organized many community events in order to increase awareness. She helped put together an Indigenous hockey tournament that hosted 60 reserves, and organized powwows that were open to outsiders. In recognition of her leadership and commitment to her community, she was awarded a posthumous Life Achievement Award from the Union of Ontario Indians. 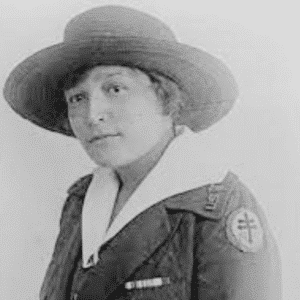 Charlotte Edith Anderson Monture, simply known as Edith Monture, was the first Indigenous woman in Canada to become a registered nurse. She was also the first Indigenous woman to gain the right to vote in a federal election. As a Mohawk woman born in 1890, getting accepted into a Canadian medical school was difficult. Obtaining a complete high school education was rare, and Indigenous people could lose their Indian status for pursuing higher education.

Despite these obstacles, she was a gifted student and did not give up. She moved to the United States to attend school in New York and graduated top of her class in 1914. She became the first Indigenous woman from Canada to serve in the United States military during the First World War. After the war, she worked as a nurse and midwife and advocated for the improvement of Indigenous health care. In 1939, she was elected honorary president of the Ohsweken Red Cross. 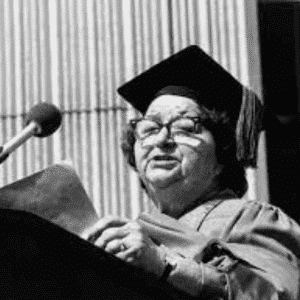 Mary Two-Axe Earley was a Mohawk and Oneida woman whose political activism helped end injustices faced by Indigenous women. She sought to amend a section of the Indian Act that removed land and treaty rights for women that married a non-Status man, and prevented Status Indian women from passing down their status to their children. Women who divorced Status Indian men would even lose their status, and the only way of having it reinstated was to marry another Status Indian man.

After a long battle to end the marginalization of Indigenous women, in 1985 the Indian Act was amended to outline a process of reinstating the status of women who had lost their status due to the previously mentioned section. As a result, Mary Two-Axe Earley became the first Indigenous woman to have her status reinstated, which she lost when she married her non-Status husband.

For her contributions to the advancement of equality and rights for women and girls in Canada, she received the Governor General’s Persons Case Award, she also received a National Aboriginal Achievement Award (now known as the Indspire Award) for her commitment to women’s rights. 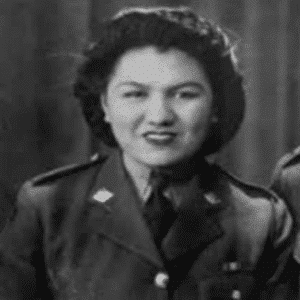 Mary Greyeyes Reid was the first Indigenous woman to enlist in the Canadian army as a member of the Canadian Women’s Army Corps at the age of 20. During her service, she became the subject of an army publicity photograph used to encourage more women and Indigenous people to join the army. Due to the popularity of the photograph, she was introduced and photographed with a number of notable public figures.

In the photo, she was kneeling in her uniform and receiving a “blessing” from a man dressed in Plain Cree Chief regalia. It circulated with the caption “Unidentified Indian princess getting blessing from her chief and father to go fight in the war”. This caption was very inaccurate as Mary did not know the man in the picture and he was not a chief at the time the photograph was taken. It was only changed much later by her daughter-in-law to include her name and an accurate description.

She was approached towards the end of the war to participate in another photo shoot that would be used to encourage Indigenous veterans to vote. At the time, Indigenous people did not have the right to vote, and veterans that wished to vote would have to give up their treaty rights and Indian status. Due to this injustice, she declined to be in the photoshoot. At a storytelling night in Vancouver, her daughter-in-law shared that when she declined she stated “All those years, I said nothing. Now I’m saying no”. 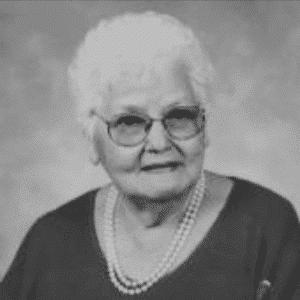 Elsie Charles Basque was a mother, Elder, residential school survivor, and the first Mi’kmaw to earn a teaching certificate in Nova Scotia. She later became the first Indigenous person to teach at a non-Indigenous school. Outside of her teaching career, she was an advocate for anti-racism and for the elderly. After moving to Boston, she sent a position paper to the United States Senate about the challenges facing the elderly American Indigenous community.

She received honorary doctorates for her dedication to the field of education from St. Anne University, Acadia University, and Provincial Normal College. She was also named to the Order of Canada and received the Queen’s Jubilee medal. Despite her many honours and accomplishments, she said her greatest satisfaction came from her students, many of whom have gone on to professional careers. Elsie is remembered not only as a teacher who made invaluable contributions to the field of education, but as a role model who fought for Indigenous people.

This list serves to acknowledge the incredible contributions that Indigenous women have made to Canada, but it is by no means a comprehensive list. I encourage you to do your own research and learn about the many Indigenous women leaders of the past and present.