There are names of women that echo in our minds and remind us of their greatness and power. The truth is that there are so many more than we should be aware of, or have studied in school. We are taking a moment to profile 5 historical Alpha Women who, despite surmounting many difficulties, have been able to achieve great things in a world dominated by men.

Hatshepsut – Pharaoh of the Egyptian Empire

I think that everyone knows the greatness of the figure of Cleopatra, but not many people know Hatshepsut of the Egyptian Empire. Hatshepsut was the longest female Pharaoh to rule in Egypt, ruling for more than 20 years in the 15th century B.C.  Therefore, history remembers her as one of the most successful Pharaohs, born around 1508 BC.

At the age of 12, she married her half-brother since it was a common practice to ensure the purity of the royal line. Hatshepsut became a widow before the age of 30, and she had no choice but to become the sole regent, for her son was still a child. She claimed the role of the Pharaoh and styled herself in the traditional kilt and crown. Her success as Pharaoh was a result of her great skill in recruiting influential supporters. Under her leadership, Egypt prospered. Unlike other rulers, she gave more attention to securing economic prosperity and building monuments celebrating the Egyptian Empire. 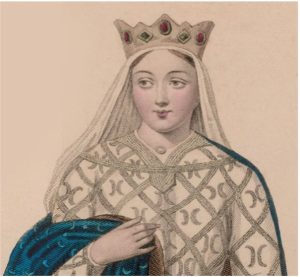 History suggests the figure of another important woman of the past: Eleanor d’Aquitaine. Queen of France and England, she exhibited perseverance, intelligence, and wisdom, especially in politics at that time, which were particularly treacherous.

Eleanor of Aquitaine lived from 1122 to 1204 and was one of the most influential and powerful figures of the Middle Ages. She was well educated from an early age and trained in life at court. At the age of only 15, she became one of the most important Duchesses in the south of France. Years later, she married Louis VII, King of France.

Many historical sources claim that Eleanor is responsible for the introduction of built-in fireplaces. Her innovation transformed the domestic setting of French households. She was a tenacious woman, even when her marriage was annulled by the church and she was forced to leave her two daughters with their father. Eleonor became Queen of England when she married Henry, Count of Anjou and Duke of Normandy, son of King Stephen.

In 1168, she founded the legendary Court of Love where she fostered the study of literature, poetry, and music. The Court of Love was the home of many artists and poets who contributed to the development of the arts in England. A few years after she was imprisoned on charges of conspiracy against the King, and she lived imprisoned for more than a decade. When she was liberated, she became Regent of the Throne by accompanying one of her sons in the government of the country. Éléonor d’Aquitaine was a powerful woman at a time when power lay entirely in men’s hands. 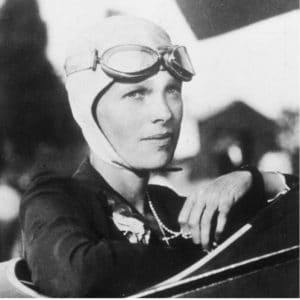 Amelia Earhart highlighted the advancement of women in aviation, demonstrating the strength and determination of women in fields traditionally dominated by men. She was the first woman to cross the Atlantic Ocean, the Red Sea and India in an airplane on her own.

Amelia Mary Earhart was born in Kansas on the 24th of July, 1897. From a young age, she challenged traditional gender roles.  Her passion for the air force began when she was a Red Cross nurse in the First World War. Amelia was astonished at the Royal Flying Corps and after the war, she began flying lessons with flight instructors. She may even have bought her own plane, a yellow plane called “The Canary”. Completed in 1921, she formally obtained a license from the Aeronautical Association.

Over the course of her career, Amelia set many aviation records and always struggled to promote opportunities for women in the aviation sector. In 1929, she was involved in the creation of the Ninety-Nines, an international organization for women pilots. Her high ambition led her in June 1937 to begin a round-the-world flight with another pilot. Unfortunately, the couple never ended the trip, since in July of that year they were declared lost at sea. 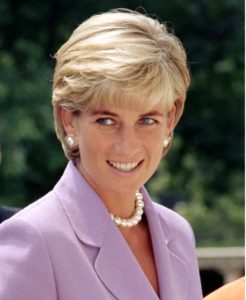 A significant woman in our time is Lady Diana. Even if she married a prince, she became known for her charity work and awareness of various mental illnesses. Diana was born on July 1, 1961, and joined the British aristocracy when her father inherited the title of Earl Spencer at which time she became Lady Diana Spencer.

Lady Diana was raised in a manor house next to a royal family estate in Sandringham. She met Prince Charles and Prince Andrew at an early age, but they lost touch in subsequent years. After school, Diana moved to London, where she lived as a typical young woman of her age, working as a janitor, nurse, and a kindergarten teacher. In 1980 Diana met Charles again, they began dating and one year later they had the wedding of the century. She became the first British citizen in three hundred years to marry the heir to the throne.

Diana became a target for the media at the time, especially when, in 1996, she officially announced that she was divorcing Prince Charles. She was also a rebel against traditional portraits of women in the royal household. She started speaking out about her fight against bulimia and depression. The Lady has been and continues to be considered the People’s Princess for her best-known charity work and her support of the AIDS crisis of the 1980s. She helped change the way people with AIDS were treated at the time. When the public tried to quarantine the patients, Diana voluntarily touched and embraced AIDS suffers to show her support.

On August 30th, 1997, Diana lost her life in an automobile accident in Paris. Lady Diana was a symbol and still greatly influences English culture. She was a wealthy woman by birth, yet remained humble. She lived her life trying to help others, and empower people who struggle. She was an icon as well as an Alpha Woman. 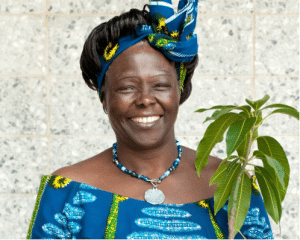 Wangari Maathai was a great woman of our time, a Kenyan environmentalist and founder of the Greenbelt Movement. She became the first African woman to receive the Nobel Peace Award. Moreover, she is the first woman from Central Africa with a doctorate, and the first female teacher in Kenya.

Wangari Maathai was born in rural Kenya in 1940 and received her education in the United States. During her time with the National Council of women of Kenya, she developed the idea that women could improve the environment by planting trees. The aim was to slow the process of desertification and deforestation. In 1997, she began a movement to stop environmental problems in her country. It brought together sustainability and women’s rights. Indeed, she encouraged women to plant trees in their local surroundings.

The Green Belt movement spread across Africa and helped plant more than 45 million trees to counter deforestation. The Nobel Committee stated that she thinks globally and operates locally. Indeed, Wangari‘s impact has preserved natural resources and brought peace and stability. She fought environmental degradation and impoverishment. She began to work hard to conserve the land that nourished her people. In addition to that, to generate employment and empowerment for vulnerable people. Thanks to her contribution, similar activist initiatives have also emerged in other countries. Maathai was a humanitarian and is also known for her support and fight for human rights, AIDS prevention and especially women’s rights.

Tags:
Previous Article
Women Leading The Dance Industry: Who Are They?
Next Article
8 Black Women Changing the Face of Cannabis in the U.S.