For Veterans with PTSD, the heart work is also the hard work, and medical marijuana helps ease the journey

Juliane Nowe is an Integrative & Alternative Healer, Reiki Master, Yoga instructor and Cannabis Consultant. She is also the life partner of Fabian Henry, Canadian Army Veteran and co-founder of Marijuana For Trauma. Juliane recounts his remarkable journey in his quest to help himself, and all veterans affected by PTSD. 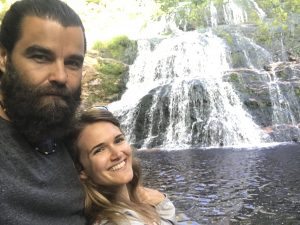 “They told me I could play hockey and asked if I like camping”, says Fabian Henry when he thinks back to how he felt at the age of 20 when he first considered joining the military. Upon graduating high school, he received a scholarship to attend UCCB. He passed half the classes but didn’t return the following semester due to financial restraints. He wanted to “work with his hands”, as he likes to call it when reflecting on the beliefs that were initially instilled in him as a young boy.

While working as a civilian on a small military base in Shilo Manitoba, he found himself running out of money, and he wanted to look for another option. The Canadian Armed Forces seemed to be the answer after continuous suggestions made by soldiers he interacted with while working on the base. With the promises of a stable income, and being a part of something greater than himself, all the while getting paid to do one of his favourite things-playing hockey, he promptly enlisted in March, 2000.

Growing up in Scotchtown, New Waterford, Cape Breton Island, Fabian is a coal miner’s son and due to tradition, he is named after his dad, Fabian Henry. His dad was a miner for quarter of a century and easily recalls working underground, not being able to see what is in front of him, eating packed sandwiches and being in close quarters with the rest of the guys that worked with him.

Working this close in a space that not many could even imagine or comprehend meant that he formed a friendship, a camaraderie and brotherhood, with those that “got it”. A feeling and sense of belonging Fabian himself would be able to relate to later on in life.

Upon joining the military, Fabian was trained to fight and win. He served overseas six times giving his all and wanting to be the best. Like many others who have joined the military, you are ready to give up everything for those who serve with you and for the country, while feeling as though you are in constant competition with those around you.

You don’t question this way “of doing things” until something happens to make you question otherwise. Many alongside Fabian were asking, “What are we doing here and why”? But silencing those thoughts and remaining in fight mode and showing no emotion was the only mode that made sense when action was required. Do one thing and on to the next thing mode. Don’t think. Don’t absorb. Don’t feel. Don’t respond mode. You are in react mode.

The Moment That Changed Everything

In April 11, 2007, Fabian was involved in an IED (improvised explosive device) incident. His job was to make sure everyone stayed where they were until daylight after a vehicle blew up driving over an IED. In the initial incident, no one was injured.

Somewhere along the chain of communication & command the message NOT to move was broken and not received or followed clearly and around 8pm a group of armoured vehicles began driving in the dark to cross a wadi (ditch). The vehicle drove over another IED under water, leaving those present with the horrific sounds that are still easily heard and felt to his day.

After the events of April 11, there was no time to think. Do a ceremony. On to the next task. Do not respond. Only react. It wasn’t until returning home that Fabian began feeling as if he “wasn’t in his body”. Questioning what happened. What could have been done differently? Where did the message get mixed up? He didn’t feel like himself, only wanting to drink and withdraw, while trying to forget what happened. He wanted to speak to the families of the men that passed. 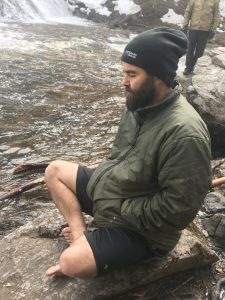 He was filled with guilt, rage, helplessness and abandonment -all feelings that the military do not support. He didn’t know who to turn to.  He now knows this story is all too familiar. Stating back 1917, according to an article published in the BBC’s section, “Inside Out”, World War 1 soldiers returning with PTSD symptoms at that time were diagnosed with “shell shock” and told they were weak. They were shunned by the military and received no treatment other than getting a hospital bed and medication to keep them sedated. Doctors, families and hospitals were at a loss as to what to do.

Fast-forward to 2010 and the evolution of care is pharmaceuticals, appointed therapists and treatments that make veterans feel worse, not better. Pills make them feel like zombies or add to the suicidal thoughts. Therapists work for the military, not for the soldier or veteran themselves.

Feeling like there is no one on their side, with brotherhood lost and a system that left them behind, it’s not a surprise that the veteran suicide rate in Canada, published in the Globe and Mail states that 1,486 veterans killed themselves from 1976 to 2012 with a 1/3 of that number being in 2002 following the aftermath of leaving the war in Afghanistan.

In the US, the number is a staggering 22 veterans a day. This same article also states, “ it isn’t clear why the rates for younger veterans are higher because these are people who will have [been] released fairly recently,” Alexandra Hebe with the department of Veterans Affairs explains. Devastatingly, research supporting PTSD and possible treatments is scarce.

Fabians’ view on cannabis before 2010 was very different. When asked he says, “In Afghanistan we are told to burn it all down or stand by and watch the ANA (Afghan National Army) burn it.” He was adamant that he would never try cannabis. Hanging on to the belief that cannabis was a dangerous drug, it wasn’t until after much persistence from his sister Cindy, who was using medical cannabis to treat symptoms she was experiencing after having a large tumour removed from her spine, that he tried it.

Defeated and with no will to live, and knowing this may be his last resort, he tried cannabis and found tremendous relief. The feeling in his body, mind, spirit, soul and heart completely dissolved any misinformation he had ever received on cannabis. He felt like himself again. He didn’t feel overcome with anger. He felt clear, not like a zombie or a person without a soul like the pills made him feel. He felt like he had energy again and was filled with the sense of wanting to shout the truth about what was happening to him!

Filled with renewed purpose, he began learning how cannabis works on the brain to help him understand how was it treating his PTSD symptoms. Researching, learning and absorbing as much information as his brain could stand, he began to advocate for himself. He also started telling other veterans and found that VAC (Veterans Affairs Canada) would cover medical cannabis treatment for veterans. He started going door-to-door, meeting with other veterans.

He educated himself and read the Veteran Charter of Rights, learning every line and understanding exactly how paperwork needed to be filled out in order to meet requirements stated by VAC, which can be an overwhelming and complex process. At the time, the majority of veterans and their families weren’t aware of what they were entitled to. Most of them don’t have case managers or someone that advocates for them, so they go without help.

Fabian recalls the beginning of MFT (Marijuana For Trauma), “At the time there were only 5 L.P.’s (Licensed Producers of medical cannabis) and I would have to take the patients files down to the post office and mail each one out myself”. In 2013 Marijuana For Trauma was created to connect patients with doctors and then Licensed Producers. Fabian included other services that provided and supported veterans and their families by filling out VAC paperwork, peer support, cannabis education and coaching, and supporting holistic and alternative health services such as yoga and the MindShift Clinic.

What started in Oromocto NB spread all across Canada, fulfilling Fabians’ desire to offer medical cannabis coverage and availability to each veteran from one end of Canada to the other. 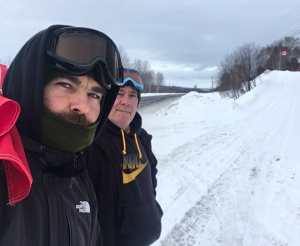 As a gap was finally being filled, in 2016 the government announced cuts in cannabis coverage. Hearing this news was devastating so Fabian decided to walk to Ottawa from Oromocto, NB – over 158 days – in honour of those who lost their lives while in Afghanistan.

A New Approach For Treating PTSD

Since then Fabian founded Breton CannaPharms Ltd., a late stage applicant to become a Licensed Producer. His intention is to provide veterans with the best treatment with a focus on strains needed for PTSD. After the scare in cuts of coverage and continuous lack of support from VAC, Fabian intends to address this by providing veterans with the first class treatment and the real healing they deserve.

Fabian and his businesses partner sold MFT in 2016 and have donated the proceeds to start the Global Alliance Foundation Fund. This mission of this charity is to empower veterans to create their own not-for-profit by providing the resources and support needed, the finances to bridge the gap in compassionate care, and by providing access to counseling, nutrition consulting, yoga, reiki, massage therapy and other services that are not covered by VAC.  Properties in Cape Breton and Pictou NS will serve as spaces for a retreat, gatherings, nature healing, connection, and more.

There is a now a new kind of brotherhood and sisterhood that is felt in these groups. There is a new approach for treating symptoms and a feeling of trust that allows the veterans to all come together and be themselves.

There is hope, life and there is so much love. I have been blessed with being alongside Fabian Henry as his life partner since July 24, 2016 and have been part of hosting gatherings, teaching yoga to the group and organizing healing and fun adventures with my love and groups of veterans and their families.

I get to feel and stand in the presence of this new way of “fighting and winning” That involves taking care of each other, doing what’s right, promoting love and knowing that the Heart Work is also the Hard Work. The heart always wins.