If you haven’t sampled thandaai at a Holi celebration, you haven’t lived yet!! A tame version of the more potent bhaang, the cool, refreshing beverage made with crushed almonds, poppy seeds, melon seeds, black and white peppercorns and saffron, is a staple at this Hindu festival.

I grew up in India. In high school, as part of the neighbourhood Holi celebration, we were treated to delicious sweets like gujia (a sweet, deep fried semolina dumpling stuffed with a mixture of dried, thickened milk and dry fruits), and thandaai which was doled out in steel glasses by grandmas and aunts who for once did not insist on our colour-laden hands being washed before gorging on these treats.

Bhaang, on the other hand, with its intense flavours and questionable quality of ingredients was strictly for the adults. Made by mixing a powder comprised of cannabis leaf and flower, cardamom, cinnamon, cloves, ginger, almonds and rose water with warm milk, the purity and potency depended upon where you got your drink from — legit relatives who would smuggle some cannabis from their travels in India or over-enthusiastic roadside shop owners who sold the stuff for a “price”. 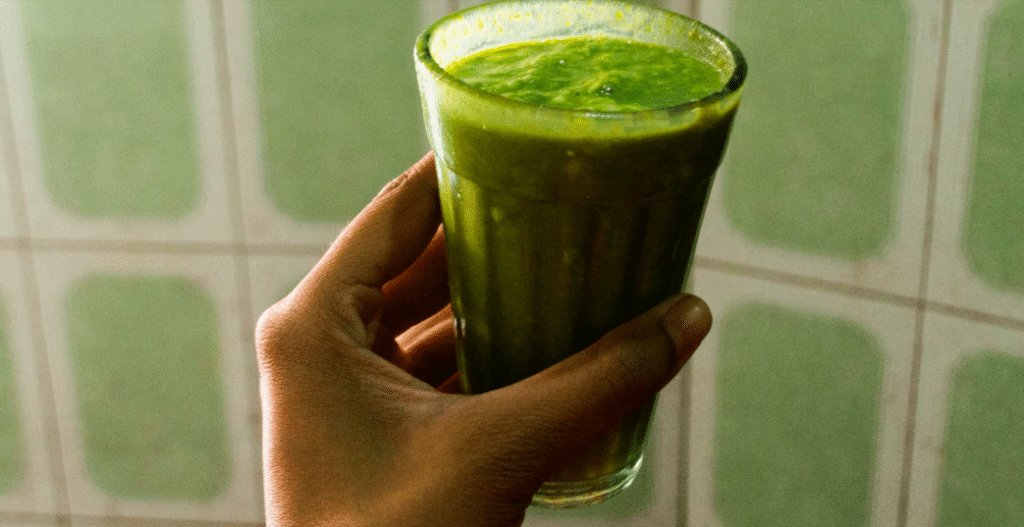 Some light reading about bhaang will reveal that consuming it comes with a laundry list of warnings similar to consuming copious amounts of alcohol or the partaking of antibiotics. Don’t drive after, drink lots of water, don’t do it on an empty stomach and definitely don’t mix with alcohol!

Much maligned for its ability to intoxicate, the growing or storage of marijuana is illegal in India but access to it is easy during festivals like Holi and Shivratri. One of the major deities in Hinduism- Shiva, known as the “destroyer” – is offered bhaang during the festival of Shivratri. According to several versions of numerous legends surrounding him, he uses it to calm himself down. After all, he is most known for his particular style of dance- the Tandava, a vigorous dance that denotes both joyful celebration and violent destruction. Trippy stuff!

“We never did it in the open- any form of smoking, whether it was cigarettes or something else, it was definitely looked down upon, especially for girls but it was in common use at home parties or at clubs,” says Akansha Rao (name changed), a publicist at a Toronto based events firm.

It’s cultural and historical presence in the South Asian region notwithstanding, taboos around the partaking of any form of cannabis, especially smoking, still exist. “There’s not much being made in the South Asian community about the whole legalization issue because as a community we are quiet about controversial issues,” says Jaipaul Massey-Singh, who is in charge of new product development at Vivo Cannabis, a cannabis company with a collection of premium brands with an intent to cater to specific consumer needs, both recreational and medical.

Singh mentions that cannabis usage cuts across cultures and he would know. Singh ran a cannabis clinic in Brampton- a multicultural melting pot with a majority belonging to the South Asian community and had patients coming in with a wide ranging issues. “Most patients came to us for anxiety, depression, chronic pain and we also had cancer patients consulting us. It would help them with developing appetites which is a big issue post chemo,” he says.

Singh recalls when a 60- year old lady undergoing treatment for cancer walked into his clinic seeking help for appetite loss. “She was a traditional Indian woman who, with the help of her children had read up extensively on the benefits of medical cannabis and wanted to know how she could use it to help with her appetite issues. She came armed with so much information, it was impressive and heartening,” he says.

The debate around access and consumption of cannabis is on and as legalization looms, even traditional consumers may look forward to having access without apprehension or judgement.

Previous Article
Dress Code: Is The Power Suit Relevant In The Age Of #TimesUp?
Next Article
The Insomnia Diary: Travel and the Tyranny of Sleep