Sleep hasn’t always been my enemy. In fact, as a young woman I had a reputation for being able to fall asleep anywhere. Perhaps too easily.

I recall falling asleep at a David Bowie concert (ackkk, the waste!!), during many movies, even during my favourite worst movie of all time, Showgirls. I’ve fallen asleep while eating, chatting, but never at work, lol. There was never a time in which I doubted my ability to just sleep. 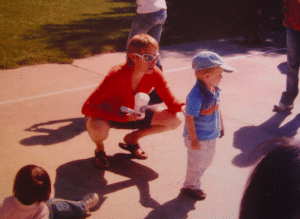 The Author as a young mother

Until I became a mother.

Oh! the glory of motherhood. I vividly recall (when I still had the ability to create vivid memories) sitting in pre-natal class, the one about breast feeding. My husband decided that he did not need to go to that class as it only pertained to the mother. Little did he know that this was the most important class of all.

I was shocked and beyond dismayed to hear that my baby would be awake every two hours or so, ready and waiting for me to breastfeed. How, I asked myself would I possibly be able to awaken every two hours to feed my baby and then go back to sleep, only to awaken an hour or so later and on and on and on? How could one still function well enough to not have a total breakdown from lack of sleep, much less the normal demands of mothering a newborn baby?

Little did I know the answer would be that it’s not possible to breast feed for 3 years, work full time and still maintain some semblance of sanity. That I would need help that I did not receive – that I did not even realize I needed. That becoming a new mother would be the most challenging thing I would ever do in my life. In fact, lack of sleep postpartum exacerbated by other issues in my life caused a slide into depression and anxiety that lasted for years.

The wake-up call came one day after Christmas a few years ago while I was in the throes of the most ridiculously stressful period of my life I hope I will ever have to encounter. Think of the most stressful things you can go through – divorce, job loss, family/mental health  issues, single parenthood, financial issues. I woke up one day and all my teeth were loose in my very inflamed gums. Every single one of them. From one day to the next. I was informed I had widespread gum disease and that I would need immediate surgery on all 4 quadrants of my gums for a whopping total of $10K.

Confused and very alarmed, I had an epiphany. There was nothing inherently wrong with my gums. I brush and floss just like everyone else. After researching, I realized that I was beyond stressed out and my body’s natural reaction was to become inflamed. Specifically, my gums. I had to change everything. I was lucky I didn’t have a heart-attack, and just had a tooth-attack instead. So while I didn’t opt for the surgery and my gums are perfectly fine now, figuring out the path to becoming a healthy person who sleeps well has become a mission in my life. I refuse to die prematurely or become ill because of stress. 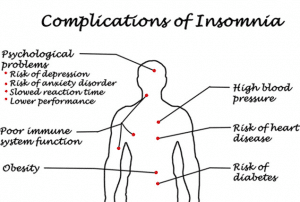 In fact, according to a long-term study of Canadians, 43% of men and 55% of women in the 18 to 64 age
group reported trouble going to sleep or staying asleep “sometimes/most of the time/all of the time.”

Insomnia is associated with obesity, Type 2 diabetes, cardiovascular disease, injuries, death from all causes, depression, irritability and reduced well-being. None of this is good.

I am still on my 14-year journey to crack the nut of insomnia. Will you join me on this journey as I document the various techniques and natural medicines I try? I’d also love to hear how you or your friends and family are tackling insomnia using non-pharmaceutical approaches.

Leslie is co-founder of Alpha Woman. As a businesswoman, publisher and mother, Leslie is seeking to live her best life in a loving, natural environment for both her, her family and the planet. Email leslie@alphawomanco.com with your insomnia story, she’d love to hear from you.

A newcomers journey with anxiety and depression
Baisakhi Roy August 30, 2018