Why The Olympics Are Important For Women From Developing Nations

The Olympics are one of the most-watched sporting competitions across the globe. Athletes from every corner around the world desire to represent their nation in the sport they love. However, for a lot of these athletes, their opponents are not the only ones they need to compete with. They must fight with the political system in their country, their societies, the financial burden, and as a woman, these obstacles are magnified tenfold.

As The Olympics are coming to an end, I want to take a moment and reflect on some of the most groundbreaking and frankly badass women that have made their mark and paved the way for others after them in The 2020 Olympics.

According to Human Rights Watch “the Saudi state essentially treats women as permanent legal minors”. The subtle ways women have shown their disdain for the harsh regulations enforced by the patriarchal Kingdom were seen as violent gestures of insubordination. It wasn’t even until 2018 that women had the right to drive, so competing in sports on an international level should’ve been out of the question, right? Wrong. 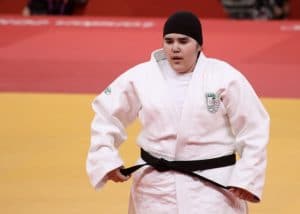 After a tremendous amount of external and international pressure, the Kingdom of Saudi Arabia sent its first female athletes to the Olympics in 2012; Wojdan Shaherkani and Sarah Attar, 16 and 21 years old. These ladies, at such young ages, defied all odds and surpassed every expectation by competing at the Games. In a nation where women weren’t even allowed to go to a sports arena to watch sports, these young women found a way to compete at the highest level.

Their events were not televised in Saudi Arabia, and it seemed like the women participated mostly to maintain an image for Saudi Arabia. However, their attendance is still a leap in the right direction for a nation that continues to be unsupportive of its women, as two more female athletes from Saudi Arabia participate in the 2020 Summer Olympics. And this is only the start.

You would expect that a country as large and populated as India would have an abundance of Olympic medals. However, it wasn’t until the 2000 Summer Olympics that Karnam Malleswari became the first Indian woman to win a medal at The Olympics. Even though only four out of the expected 42 Indian journalists in Sydney were present during her weightlifting in the women’s 69kg category round, the only thing weighing her down that day was the weight that she lifted to win bronze.

The fact that 38 journalists didn’t bother to show up could have been troubling but was not surprising. In a nation where sports were not prioritized at all, even less for women, how could they expect that a woman from India would have the ability, let alone audacity, to fight for a medal and win one! She made her mark, that’s for sure, by being the first Indian woman to win a medal at The Olympics, but she is certainly not the last. This year, Mirabai Chanu followed in Malleswari’s footsteps. She used her skills from when she was a 12-year-old chopping and carrying firewood, to bag a silver medal in the women’s 49kg weightlifting. 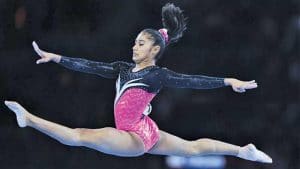 Gymnastics has long been dominated by the West. Most gymnasts who compete and succeed in the Olympics tend to have one look to them, and this has been the case for decades. They are mostly white. However, at just 18 years old, Milka Gehani became the first woman from Sri Lanka to qualify for gymnastics in The Olympics. She competed in the 2020 Summer Olympics with only one other woman from her nation, Equestrian Mathilda Karlsson, (who competed for Sweden until 2018). A new face was long overdue in the gymnast scene at the Olympics, and at such a young age she shouldered a large responsibility. She has received a scholarship for two more years in Japan, and we cannot wait to see what she achieves! 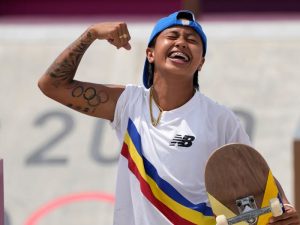 Margielyn Didal Shows Us How Happy She is With Her Skateboard at The 2020 Olympics (Source: AP Photo/Ben Curtis)

Skateboarding debuted at the Olympics 2020, and Margielyn Didal from Cebu, Philippines came in seventh place. She viewed skateboarding as “the best way to escape problems for me“. For a girl from a low-income family, skateboarding was a way for her to aid her family financially. From illegally skateboarding with borrowed skateboards at 12, to competing in The Olympics at 22, she has come an incredibly long way.

Didal is an inspiration for many young girls and is evidence that skateboarding is a sport to be taken seriously. Identifying as a member of the LGBTQ+ community, she has faced nothing but acceptance from her parents and notes her girlfriend as one of her strongest supporters. More than medals and money, Didal wants one thing; respect. Her desires are starting to come true as she is still the only Filipino to appear in the TIMES Most Influential Teens in 2018.

Nigara Shaheen was born in Afghanistan but was forced to flee with her family to Pakistan to escape the Afghan war. When asked about what message she was able to give young Afghan girls she said, “My presence itself should give hope to all young Afghan girls that are dreaming of the Olympics. I have faced all the obstacles they are facing. But If I can do it, so can they. It is hard but nothing is out of the human capacity.” She chose to go back to her home country at 18 for the first time since she left to go to university and is now competing in the 2020 Olympics as a Judo player for the Refugee Olympic Team. Now, more than ever, with the conflict in Afghanistan worsening and the Taliban continuing to take over, an Afghan girl on-screen is even more important. As an immigrant who never fully felt assimilated to Pakistan; “the only safe haven and mental calmness for me was sports”. 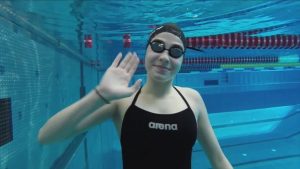 Yusra Mardini is Just as Comfortable Underwater as She is Above (Source: ABC News)

Yusra Mardini was born in Syria and after her house was destroyed in the civil war, her sister and she fled. Halfway through their trip to Greece on a boat, the engine stopped working and they were forced to tread water for 3 hours. In the middle of the ocean. After walking on foot from Greece, she arrived safely in Germany and was joined by the rest of her family.

Displaced from all she’d ever known by a war that devastated the nation and forced her to swim to safety, she now represents the IOC Refugee Olympic Team for the second time in the 2020 Summer Olympics. The traumatic escape from her home nation turned into a ray of light, of hope, and she has used this to inspire hope in other upcoming sportswomen from Syria and beyond. She is an ambassador for the United Nations Refugee Agency (UNHCR) and wants to open a swim school for girls like her. Girls who use sports as a key to achieving their dreams and an escape from unfortunate situations.

Medal or no medal, participating in The Olympics is an achievement in and of itself for a lot of female athletes from developing countries. Representation can do wonders at bridging the gender inequality that is so evident in sports. Seeing a woman like you on screen in a male-dominated activity or sport is so incredibly valuable to young girls. This is just the start of a new wave of professional female athletes and we’re excited to meet the women who will make their mark on history.

We at Alpha Woman Co had the pleasure of speaking