Coping with Multiple Sclerosis: my discovery of cannabis

An Unwanted Guest at the Party

There was no way I was going to the Halloween party. I couldn’t dance. Heck I could barely stand, let alone keep up with the drunken chit-chat about careers that dominates Toronto nightlife. I was on short-term disability and hadn’t been to the office for over a month. Dread rose into my chest and spilled into a tear. I had to tell him. But I could barely speak. 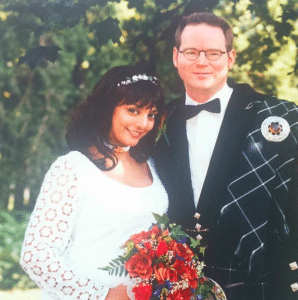 The author on her wedding day

This was the first real relapse I had experienced since I had been diagnosed with Multiple Sclerosis five years earlier. Since my early 20s, I had experienced alarming events. There was a heaviness in my chest – such that each breath got more than more shallow and painful – during an organic-chem lecture.

Then there was not being able to feel anything from my waist down for several months. I chalked it up to the irresponsible drinking habits of young adults. But when I experienced blindness in one eye on my honeymoon, I was determined to get some information.

I was told by a number of medical professionals that it was “something that happens to a lot of women of my age.” All I could think was that if there were a lot of men in their 20s that couldn’t feel anything from the waist down, doctors would at the very least have a name for it.

In truth, Canada has the highest rate of MS in the world – an inflammatory neurological disease of the central nervous system. An estimated 93,500 Canadians live with the disease and the Public Health Agency of Canada anticipates that number is likely to rise to 133,635 by 2031.

And get this: women are three times more likely to get diagnosed with all four stages of MS.

Why that is, and the cause of MS, remains a mystery.

Catching my reflection in the mirror, I almost smiled: With two wide, white streaks shrieking through my black curly wig, I definitely nailed the undead bride look. But I felt like a Zombie. I didn’t want to eat brains. I wanted to stay home

As I was trying to conjure my voice, my husband walked into the bedroom adjusting his frizzy grey wig. He rushed over to me and started tousling mine and said with enthusiasm that there was no denying it, I made an excellent dead bride to his Beetlejuice.

His face fell into disappointment when I passed him a note: I can’t go to the party.

“Please come with me. You won’t have to talk to anyone and you can just hold onto my arm the whole time. I won’t leave you for a moment,” he said pleadingly. During the quiet car ride over, he kept telling me that we didn’t have to stay long.

Clinging to my date’s arm, I silently watched all the really great Pirates, Vampires and Zombies drinking and dancing. I remembered I used to love Halloween. 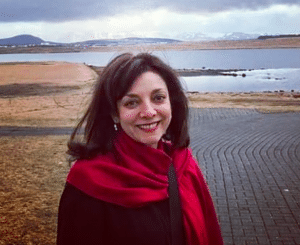 Lorrayne at an Authors Festival earlier this year in Iceland.

Our host asked us if we’d like to see his new place, as the party was in the condo party room. We walked the winding path through the garden and ended up at his gorgeous bachelor pad. On the tour (designer kitchen, stolen tobacco store Indian and very impressive bookshelf) we passed a kitchen table filled with every party treat you could imagine. Without hesitation the chocoholic in me reached out, took a brownie off the dessert tray and very slowly nibbled on it for the remainder of the viewing of the two-person shower and the bidet in the master ensuite.

Back at the party, everyone seemed a little friendlier and within minutes my date slipped off with the host to put on different music. For some reason, I wasn’t mortified. I was actually standing on my own and enjoying the gregarious antics of the creatures of the night.

Beetlejuice and the host Pirate had put on an ‘80s tape and the party people exploded into an almost flash mob of dancers.

Ten minutes later this undead bride was very much recreating the video to Cyndi Lauper’s “Girls Just Wanna Have Fun.” Instead of making a 20-minute appearance, Beetlejuice and I partied for over two hours.

When I thanked the host for throwing such a good party, which really lifted my spirits, he replied that hash brownies always put people in a good mood. I was a total convert. I had experienced first-hand the therapeutic benefits of marijuana. I had to tell the doctor about this!

Would you try medical cannabis to help manage your symptoms if you had a chronic illness such as MS? 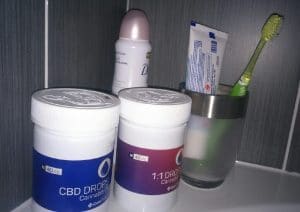 But the news was met with a less-than-enthusiastic response. My MS neurologist had heard that marijuana has positive effects for Multiple Sclerosis patients but that the research was not conclusive and he couldn’t recommend it as it may have long-term effects on memory. My GP said the same thing.

I was undeterred. There were cannabis products available in Toronto, just not readily. So I made do with what was available. In recent years, my new MS neurologist gave me a referral to a doctor who was able to prescribe cannabis for me. I take two separate concoctions to help manage the pain and other MS symptoms, such as insomnia. I take a few drops (between 0.1 and 0.5 ml) of a CBD oil in the morning and and another few drops of a CBD/THC combination oil an hour before bedtime. This allows me to avoid the beta-interferon drugs that my MS doctor prescribed over a decade earlier. I still use other pharmaceuticals, such as ibuprofen and/or a sleeping pill, when I need more immediate relief.

Now that cannabis is legal, not only is there more research being done, but there are more varieties to help people with specific needs. I will continue with my cannabis oil for pain relief. It is no cure but it makes it easier to dance with this awful disease.

Lorrayne Anthony is a writer and editor. She has worked for The Canadian Press, the Toronto Star, the Prague Post, and, the New York Times. Born in Kolkata, Lorrayne was raised in Brampton, Ontario and now lives and writes five minutes away from the lake.