In Michif cultures we have adopted the philosophy of Wahkotowin,which instills a responsibility to others and the environment. The essential teachings we follow work to protect the planet and our community. Many Indigenous Nations have similar concepts, and they helped us live harmoniously alongside each other before we were aggressively colonized. I am explaining this at the beginning of the article in hopes that you will keep this in mind when you learn about the Wet’suwet’en Nations’ situation and what has influenced my understanding of what is driving their actions.

A couple of months ago I was considering how I could make the biggest difference to help the environment since the recent increase in natural disasters is clarifying that climate change is going to cause a lot of problems. As an Indigenous woman in education, I also try to find ways that I can restore Indigenous rights and ways of knowing. There is one movement that stood out to me that centers both of these issues, and that is the land back movement. There are controversies around respecting Indigenous sovereignty all across Turtle Island right now. One that has been going on for far too long is the pipeline that is being forcibly built through Wet’suwet’en territory.

I became heavily interested in the Wet’suwet’en efforts because the RCMP were being sent in to police the area while just a little ways away they were needed to help with the floods and fires. These actions made it clear that there will continue to be a need for land defenders. When doing more research I found out that I could go there to camp to help the cause, and could even try to get sponsored so that I was not using up my savings. I debated going for a long time, but became incredibly anxious because I saw how violent being on the front lines was. As a white person I knew that I would be less of a target, however, I was still scared. That is how I know that the land defenders are some of the bravest and strongest people who deserve National support.

The events in B.C. are contradictory to Canadian law and are exemplary of patriarchal domination through militarization. The Wet’suwet’en Nation is on 22,000 square kilometres of unceded Indigenous land. Although we did not need the government to recognize this for it to be a fact, it is notable that in 1997 the Canadian Supreme Court officially determined that Wet’suwet’en land is unceded.

Still, TC Energy is building its Coastal Gaslink pipeline right through the territory. The Canadian Government is allowing this to happen and is helping by sending planeloads of RCMP officers to violently arrest land defenders, journalists, and elders. These officers are also causing excessive destruction to the homes of the Wet’suwet’en people. 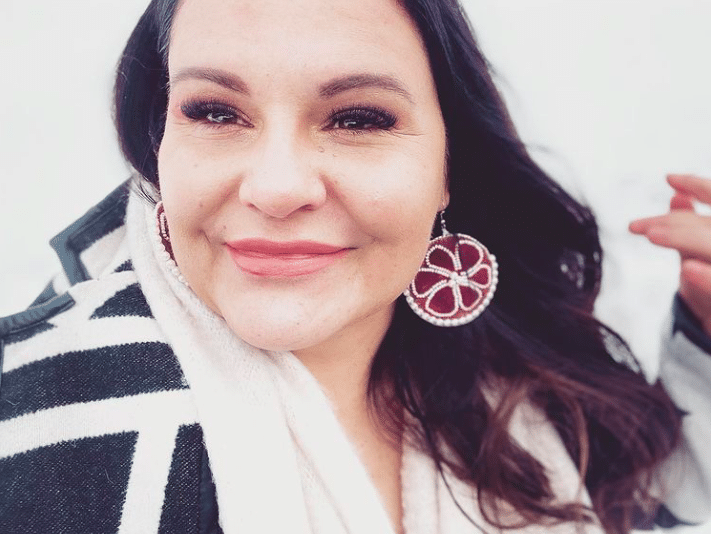 There are currently some incredible women, matriarchs, and elders working as pillars of the community. They are both on the frontlines and provide encouragement and reassurance to those being arrested. Brandi Morin, an Indigenous journalist documenting the events highlights the work of some of the matriarchs who, at the Uni’stot’en Healing Camp, are practicing traditional ways of life. These traditional practices are essential to the Cause because it encourages people to assume their role to care for the land and water (Jan. 5th post, bmorinstories).

Sadly, being a journalist in this situation has some risks. On Morin’s social media platform, she explains,
“Police actions make clear that I’ll face the risk of arrest just for doing my job as a journalist. Indigenous peoples are in a battle of the ages to survive & protect our earth from environmental destruction caused by colonial-rooted violence & greed” (Jan. 4th, bmorinstories). 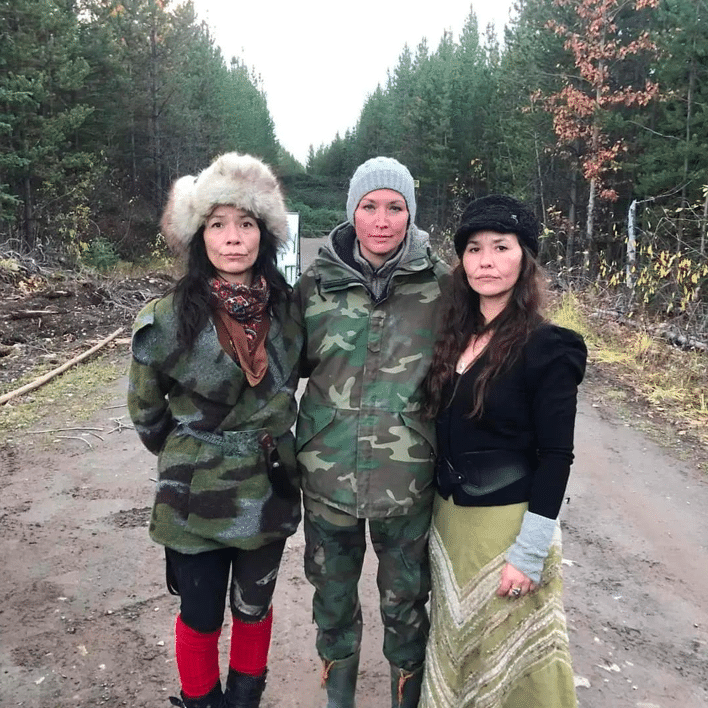 Two women who have shown up on several occasions across the media are Layla Black and Molly Wickham. Both women have made it their goal to protect the territory. Molly Wickham, whose hereditary name is Sleydo, is a member of the Cas Yikh House and works hard to educate the world about the infringement of Wet’suwet’en rights. Sleydo is featured in an article that describes the struggles they have faced when trying to protect the land specifically at one historic site known officially as GbSs-8.

Sleydo describes the site, saying, “You’ll find everything you can ever want or need to harvest in this one little area” (source: The Tyee). Unfortunately, TC Energy intends to build the pipeline directly through this site, despite it being rich in archaeological artifacts. She describes the significance of the artifacts, saying, “It’s evidence of our occupation of this land…This is legal evidence of our title. If they come and destroy this, they’re wiping us off this territory. They’re erasing evidence of us being here. So, it’s really important that it’s protected” (source: The Tyee). 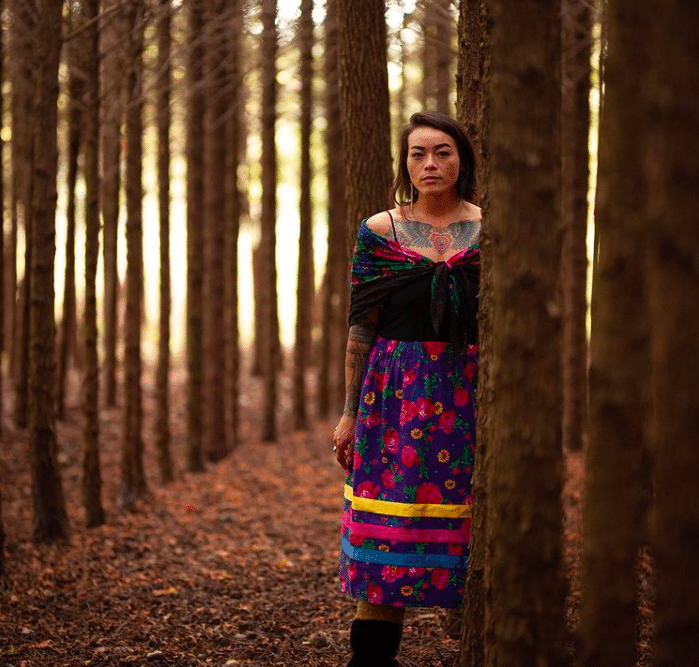 Both Sleydo and Black have been arrested by the RCMP. Black is from the Mohawk Turtle Clan and is an activist, storyteller, and filmmaker. On social media, she describes her experience with being arrested. When she was on the frontlines, she saw how violently the police went after the men, as she describes,
“Seeing my brother ripped off and grabbed by his braids, them just jumping on top of him, slamming him down, and uh, his legs kind of bent back in a weird shape and y’know, he’s yelling ‘I can’t breathe, I can’t breathe’” (source: yintah_access, December 20th).

When she was arrested, she had to deal with increased discrimination, as she described that the officer who arrested her winked at her when she was handcuffed in his car, and later, how her clothes were taken away, being forced to be clothed only in her long johns for the proceedings at the courthouse source: (yintah_access, Dec. 20). Black’s experience was clearly about her race as she noted that some of the non-Indigenous women had no restraints at all, while she and two Indigenous men were the only ones with both wrist and ankle restraints. When they were being taken to the courthouse in what looked like an SUV with a dog cage in the back, she describes,

“That feeling of that hatch closing and just being in darkness. And again, you don’t know where you’re going. You’re just going wherever you’re told. And there’s this sense of control and dominance. You know, it’s just like this degrading feeling of humiliation” (Source: yintah_access, Dec 20).

Due to the scare tactics used by the RCMP, Black and others were left with a fear of the police. She also described her feeling of defeat, and how she felt like a criminal despite knowing that her actions were right. The land back movement was created out of a responsibility to the land and water, and to future generations, making her actions the exact opposite of criminal. In the words of Janet Williams, an well respected and loved elder explained,

“So much of our territory is already gone, it makes me really hurt” (Soure: The Tyee).

The fact that Indigenous elders are being disrespected, disregarded, and even arrested may be the most frustrating part for me, and was what drove me to want to go and help. I hope that by the time I am done school that the issue will be resolved, but if not, then I look forward to being there for the Wet’suwet’en people.

We must respect the decisions made by Wet’suwet’en hereditary chiefs because they are a sovereign Nation and need to be treated as such.

Madelaine Enns is a Michif and settler mixed woman from Saskatoon, Saskatchewan. Her preferred pronouns are they/them or she/her! She is currently in her third year of education through SUNTEP, a Michif program created by Gabriel Dumont Institute on the University of Saskatchewan campus. Her education sparked an interest in writing about social justice topics, specifically related to Indigenous, Environmental, and women's rights. Madelaine is also currently working at Prairie Harm Reduction in their youth homes, where she is a youth support worker. Outside of school and work she dances with an all hip hop and street styles dance company and likes to spend time reading or with friends.