NO. You Cannot Touch My Hair!

Do you know what it’s like to have a stranger come up to you and start playing with your hair? Or to have your hair out and natural, and have people constantly come up to you to tell you how soft and fluffy it is?

Imagine being in Costco and suddenly someone starts tracing your braid with their finger to tell how cool it looks? In your head, you are screaming  “DON’T TOUCH! Do I walk around touching your hair? No. soo DO NOT touch mine”; but all you do is smile back and walk away because you don’t want to be labelled as the “Angry Black Lady”.

Well, I do, and not just me, but Black females all around the world experience the same thing. This is why Dr. Mena Fombo started a campaign to help bring an end to unwanted hair touching.

Who is Dr. Mena Fombo?

Dr. Mena Fombo is a serial entrepreneur, film director, leadership development trainer, international diversity and inclusion consultant, and global speaker. Dr. Fombo is committed to promoting and campaigning for diversity, representation, and inclusion. She is well known for her powerful TEDx Talk and campaign No. You Cannot Touch My Hair. The motivation behind her campaign is to bring attention to “hair attacks” and unwanted hair touching that women of colour experience on a daily basis. Although some may see it as no big deal, Dr. Fombo helps us to understand that there is always a deeper meaning to the things we do.

In the summer of 2017, Dr. Fombo conducted a survey to see how many people experience “hair attacks” around the world. She found that about 50% of the respondents have had their hair touched by people they have never met and that these “hair attacks” happen everywhere from work, to school, to parks. A quarter of the respondents said they felt invaded and when they would question their “attackers” they would either be dismissed, ignored or met with responses such as “You can touch mine”, “I’ve never touched afros before”, and “well if your hair wasn’t so beautiful people wouldn’t touch it.” In the TEDx Talk, Dr.Fombo compares hair touching to the experiences of Saartjie Baartman.

In 1810 Saartjie Baartman was taken from South Africa and brought to the UK. She was put on display in Piccadilly circus where thousands of people would come each year to stare, point and touch her body. Saartjie was publicly examined and objectified due to her large behind and after 5 years of inhumane treatment, Saartjie died. When she died they made a plastic cast of her body and preserved her organ to display in museums until the 1970s. It wasn’t until 2002 that Saarjie got an official burial. 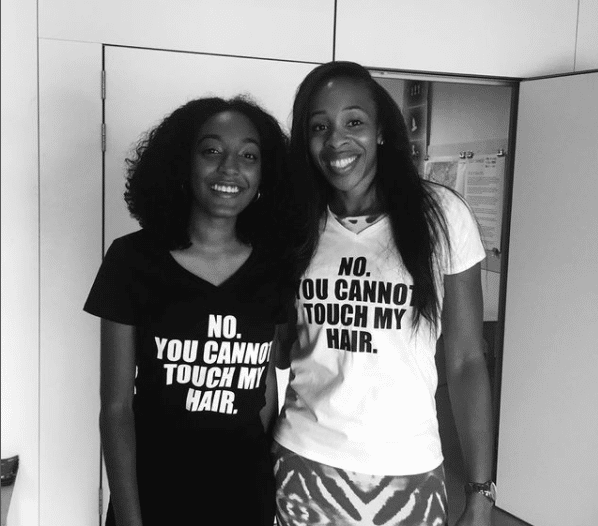 “Is the motivation for touching hair different from the motivation of those that went to see Saartjie Baartman?” asked Dr. Fombo rhetorically. The fascination with black bodies has been around for centuries and these traumatic actions are repeated generation after generation. Black women continue to be degraded on a daily basis. Hair touching may seem like a harmless gesture, however respondents from the survey conducted by Dr. Fombo said that having one’s hair touched feels like being petted in a zoo.

The essence of Dr. Fombo’s campaign is to point out that it takes all kinds of people to make the world and if we weren’t so intrigued by our differences, we would learn to embrace them more. Her TEDx Talk has brought a lot of awareness to the issue of unwanted hair touching and as a result, more people are speaking up about it and creating educational content to help change people’s actions.

“If the motivation is different then we need to let our actions be that change” -Dr. Mena Fombo

I am a first-year student at the University of Ottawa studying Business Technology Management. Aside from my major I am very passionate about social justice and black excellence. A quote I live by is "You were born an original. Don't die a copy"-John Mason, in other words, we are created uniquely and we should embrace our differences rather than change them. My favourite leisure activities are reading (which I have started my mini library), any kind of creative work, and baking. I have big dreams of leaving my mark in this world and each day I am one step closer so darkening the print.