Tracey Mason: There’s so much more camaraderie among females in the cannabis industry. Everyone is looking to give each other a leg-up.

Tracey Mason is CEO of a wine company that has launched the world’s first luxury line of cannabis-infused wines from Napa Valley. Saka Wines is an alcohol-free beverage line featuring sparkling Brut Rosé and still Rosé wines infused with THC and CBD. Tracey joined the company in December 2018 after a long career in the alcohol industry, and caught up with Alpha Woman just prior to releasing House of Saka to the market.

AW: Tell us about your career before House of Saka.

TM: I’ve been in the wine and spirits industry for almost three decades. I started in sales as a young woman selling wine on the east coast and gradually moved up into new product development with Diageo, the largest alcohol company in the world. I was then recruited out here in Napa Valley to lead global innovation for a company that at the time was called Beringer Glass and is now Treasury Wine Estates. That job helped me hone my new product development skills and processes. Over time I took on more senior leadership roles in the wine industry, largely in marketing and new product development.

In the early part of 2018 I took on a role as CMO and Business Development officer for a company called Terravant Wine Company. About 8 months into that I got a call from an old colleague of mine (she’s actually on our current advisory board) informing me that House of Saka was looking for a badass female CEO. 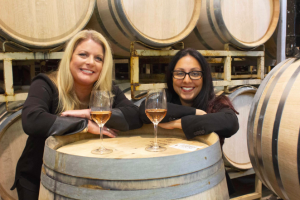 By virtue of my background I’m a little anti-establishment. I tend to zig when everyone else is zagging so I felt it was an interesting opportunity. And after speaking with Cynthia Salarizedah (House of Saka is her brainchild) I came on board to help get this great concept off the ground.

After my initial meeting with her, I sat down with all the people I respect within the wine and spirit industry and asked my trusted advisors if I was crazy to take a look at this. Universally – and I asked the most conservative people I know – they all told me I had to go for it, that it’s worth a shot. I jumped on board in September of 2018 and since that time we’ve gone from zero to sixty. We’ve put the pedal to the metal and now we’re in a great position, which a lot of startups never achieve.

What were the decisions you made that accelerated the business so quickly? 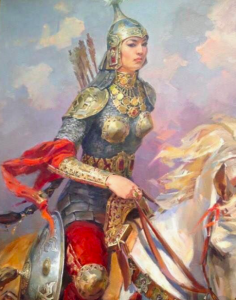 Building a brand that has a story. The brand idea of House of Saka stems from an ancient society of female warriors. Most people believe that this story is folklore but as it turns out, archaeological remains of female warriors buried with their weaponry have been unearthed so this society really did exist. Rejuvenating this concept is timely because it speaks to women, it speaks to empowerment, it speaks to everything that I think is happening right now. Whether it’s in the #metoo movement, or people simply saying “we’re sick of this, we’re not going to take it anymore”, the idea of the female warrior is resonating.

What was germaine to that group of female warriors was the use of the ancient cannabis plant. It was used as a rite of passage and as a pre-battle ritual. In ancient times, cannabis was often infused with wine so for us, the connection of House to Saka to the female warrior and the legitimate use of both products in an ancient way felt like a great connection.

Also, the design of the product is aesthetically beautiful. My connections in wine country enable to us to procure Napa Valley rosé and Pinot Noir, so we’re able to produce a top-quality product that looks superb.

We put together an intelligent, well-thought out plan and then we focussed on executing our plan.

Tell us about the patent pending formulation behind Saka Wines.

Making a cannabis-infused wine is no easy feat. For example, our rosé goes through full fermentation just like any other wine would, but you can’t have alcohol and cannabis in the same product.  We had to develop a way to gently remove the alcohol, make sure the flavour components are built back in and infuse it with a water-soluble, self-homogenizing cannabis solution. The technology to accomplish this was only developed within the last year and is still being perfected to this day. The patent that we’re in the process of filing lies solely within the formulation itself. 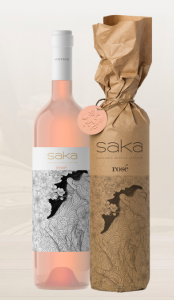 I feel wine will continue to play a role in our lives, especially as it relates to meal enhancement and celebrations. But what I love about Saka is that you can still have that wine ritual. You can still come home from work, put a corkscrew in a bottle, and pour yourself a glass of wine. You still get to have that beautiful experience, with the aesthetics and the flavour profile that you’re expecting from a beautiful bottle of rosé, but you don’t have the residual effects of alcohol. You don’t have the calories, you don’t get a hangover and you don’t get any of the negative health effects that we know happen with alcohol consumption. You feel good, you feel relaxed but you don’t feel drunk or out of control.

What is the cannabis profile in Saka wines and where is it available?

It’s a proprietary mix of both the THC and CBD cannabis compounds. At the moment we’re only able to sell through dispensaries in certain states in the US. We’re expecting that to change, but we’re also looking at alternative formulations that are CBD-based which would allow greater distribution to a broader retail market.

Do you feel that cannabis will be rescheduled federally soon?

Yes I do. I don’t see how it couldn’t be, when you think about the billions of dollars that are being traded currently on the Canadian Securities Exchange. I think eventually it will be declassified as a schedule 1 drug which would mean that individual states will have the chance to ratify how, where and when each state deploys cannabis. This will allow us to ship inter-state which we currently can’t do.

For example, when we launched House of Saka in Nevada we had to use extractions from plant material that is actually grown in Nevada. The cost of goods in the desert, where cannabis is grown in greenhouses compared to California where it grows like wine grapes is significant. The market will drive this, as it drives everything.

What are your most important lessons an as entrepreneur?

Always expect the unexpected. You have to remain nimble and flexible. I try to respond to challenges and take a considered approach, instead of reacting in a reflexive way.

Is there anything you would have done differently, looking back?

As it relates to House of Saka, absolutely not.  We came into the business with a fair bit of experience. We entered this project knowing that we were going to come up against unforeseen hurdles and we would have to be prepared to get over those hurdles.

We also put together an all-female rockstar Advisory Board. That allows us to see around corners as it relates to upcoming legislative changes, and helps put us in connection with the right type of people to help further our financial raise. They’ve been the wind at our backs. 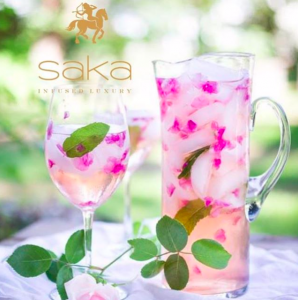 For years I lived in the misogynistic world of alcohol, and it’s still unbelievably so. It might better masked now, but behind the scenes, the alcohol industry hasn’t changed. What I have noticed is that there’s so much more camaraderie among females in the cannabis space. Everyone is looking to give each other a leg-up. It’s not so much that you’re affecting changes, it’s that you’re creating the environment in which change takes place.

As a female in very male- dominated industries do you have any leadership advice for women that has worked for you?

Was it challenging to be a gay woman in the alcohol industry?

Well I often make a joke that one of the benefits of being gay in a totally male-dominated industry is that is no one can ever say I slept my way to the top because there’s nobody at the top with whom I would have slept.

All jokes aside, it was a bit challenging in the beginning but it’s never held me back in any way. If anything it seemed to create a level of comfort with my male counterparts. Diageo welcomed diversity so I was comfortable to come out, and have my career take off in a supportive environment.

Any parting words for the Alpha Woman community?

I encourage everyone to read and learn about cannabis because it’s quite a magical plant and I don’t mean from the psychoactive point of view. I mean from a healing and general wellness point of view, especially for women. I’m about to turn 51 and I suffer from the same thing everyone suffers from as we enter this phase in our lives. A lot of it is based on not sleeping well, which is such a prevalent problem amongst my executive friends. I’ve introduced a lot of them to cannabis products and it’s changed their lives.

My parting advice is read, learn and figure out how to solve health challenges naturally if possible. Cannabis is an organic way to help treat health and wellness issues without having to go pharma.

Mentrual pain is a thing! It is also very hard to

Get to know the Comics of this fantastic show line

Menstruation, though one of the most natural and q

We, at Alpha Woman, are truly very excited to pres

Menstruation, even in the 21st century, is still t

Get to know the Comics of this fantastic Alpha Wom

We are so excited to share our conversation with o

This #Menstruation month has been an eventful one

Alphawoman is here to debunk some common myths you

Today the Alpha Woman Street Team will go around t

Back by popular demand, we present to you the Seco

It's Foodie Friday! This healthy and quick recipe

Did you know that menstruating people spend on ave