An Interview with Natasha Raey

As a pioneer in this industry, Natasha Raey is not your average cannabis advocate.

Natasha has been actively advocating for public health policy for years.  She holds a Bachelors of Science in Molecular Biology and Biochemistry as well as a Masters in Health Administration from the University of British Columbia. As such, Natasha understands both Doctors’ concerns on the efficacy of using medicinal cannabis in treatment as well as the importance of individuals’ rights to the best treatment possible.

Alpha Woman: You’re a big medical marijuana advocate. You’ve made clear it’s very important to you.  What inspired your advocacy?

Natasha Raey: I’ve always worked in health care. When I finished my degree, I was a lobbyist for public health policy for years at all three levels of government.  I didn’t really start doing anything in marijuana until Lift.

Being a part of Lift Cannabis was my first foray into the cannabis space, but the whole female empowerment issue has always been really important to me. We know that, in the US, one in three leadership positions are held by women in this industry.  This is the first time in history that women can enter an industry at the same time as men, legally. So the question is, how do we do this for women so that we can create our own world here?

I’m part of an investment group of men in the industry and I’m the only female they’ve ever worked with.  We need trailblazers who are showing what women can do.

Personally, I’m also a recovering alcoholic. I’ve been sober for three and a half years. As a society, we’re so easy with drinking.  It’s normal—it was normal for me to be drinking at 10am on a Tuesday.  No one would bat an eye.  But if I showed up at a restaurant and started smoking a joint—can you imagine what would happen?  So, I think for me it was also experiencing that side of the world, and knowing that there really shouldn’t be a stigma.

AW: So, you partake in cannabis?

NR: Yes, I didn’t really smoke cannabis for a long time but I’ve recently started again, because of my own struggles with anxiety and depression. So, it helps a lot with that. More than prescription medication.

AW: Do you find there’s a big difference between Vancouver and Toronto, in terms of the mentality around cannabis and the cannabis industry?

NR: I think the Vancouver culture has just been around  for a lot longer, and it’s just more laid back.  And even on the legal side of things, I don’t own a dispensary but if I were going to open one, I would open it in Vancouver. I wouldn’t open it in Toronto.  The climate is a lot friendlier out there and the Toronto police force has made it clear what their role is in the industry.  I think the police force in Vancouver feels there are other things more pressing than cracking down on dispensaries, especially with the Fentanyl crisis.

AW: What excites you about legalization?

NR: I’ll be honest, I’m not that excited about legalization. I’m very much a free-market person.  I don’t think the Government needs to have a massive role in what we do.  That’s just my political opinion.  The Canadian way of doing things is very paternalistic—”We need to protect the youth, we need to regulate and control everything we can.”  And I don’t necessarily agree with that.  There is opportunity for us to make a lot of tax revenue because we are making a lot of money in this industry.

I don’t even think the decision makers understand how much money comes in.  I think they look at the numbers reported to Health Canada and they’re like, “We could reach 100,000 or 500,000 patients.” I think, and I don’t have any hard data to back this up, that 70-80% of people are still buying from places that are not Health Canada-sanctioned for their own medical purposes, so the numbers are astronomical. And if you think of how much we could make on tax revenue, and if we put that money back into something positive for the community, I wish legalization was going there. I know it’s not but I know at least we’ve made it really far from where we were before. So, I’m excited that we are headed toward legalization, but I’m not over the moon. 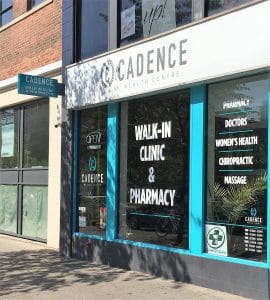 AW: So, you have a fully functioning pharmacy. How is it going to change when cannabis is legalized?

NR: Well, I see us being a distributor of cannabis under the medical program.  I assume that’s where pharmacies are going, and even with our executive program and what our physicians are doing, I see cannabis as almost being another layer of wellness. Because our patients are coming here for primary care, for chiro and for massage, cannabis is another modality of treatment and they can come here for education.

AW: What do you think women’s role will be in the legalized cannabis market?  How do we continue to pioneer once legalization happens?

NR: I think that, as women, we are innovators and unfortunately, in this industry, if you’re going to innovate you’re going to take risks.  So, I think it’s going to continue to be about us taking risks and pushing the envelope.  Because that’s what we’ve been doing.  You see people who are making edibles and lotions.  They are all essentially breaking the law, but what they are also doing is building up this knowledge and research base on what is possible for medical and recreational marijuana.  We need to leave space for innovation to happen and I think that comes from women.

AW: What is SheTalks?

NR: SheTalks was created by a group of women, including me, and we pulled together and said, “How do we create a space for women to be authentic?” I was watching a lot of Ted Talks at the time and so we created a format where we have 16 women who speak for eight minutes.  Because when you only have eight minutes, you can’t fill it with all the bullshit.  There’s no fluff, you’re just telling a real, authentic story. 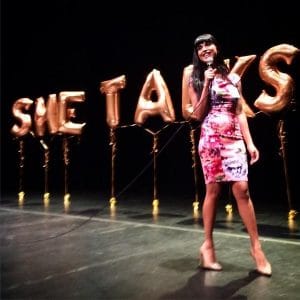 We launched it with the SheTalks YVR event. The first event was amazing.  We had 600 people, and when you’re there and you hear these women speak, depending on where you are in your life and where you’re sitting in the audience, you see that it doesn’t matter what she looks like or what she seems like on paper—we’ve all been through things and come out on the other side.

For me it was very therapeutic. I was in an abusive relationship for 13 years, and for me it was a belief that if I share my story, I own it and no one can ever use it against me. So that’s what SheTalks is about—owning your own message.

AW: Best advice you ever received and would you give the same advice to a woman trying to be an entrepreneur?

NR: I don’t know if it’s advice so much as seeing how other people have worked.  I’ve been blessed to have access to people who have been very successful.  I think it’s about risk taking.  I’m not risk adverse and as women I think we need to take more risks.  Because I think we are always trying to make things safe and sometimes you can’t quit your job if you have a family because it doesn’t make sense. But I think we need to take more risks.

AW: Do you have any advice for people of colour or different ethnicities around how to tell their families?

NR: Storytelling.  That works especially well in South Asian cultures. We love gossip. It worked really well with AIDS/HIV education.  There was a project in India where hair dressers were educated on AIDS/HIV and then positioned it as gossip with their clients when they were getting their hair done.  That was a way of educating the community.

I can understand that parents just want you to grow up and become a doctor, and probably not work in the cannabis industry.  So, I think the whole thing is about conversations and story telling.  I think culturally it’s going to be harder.  That’s where doctors can really help because, in South Asian communities, doctors are god and whatever they say is taken very seriously.

AW: When you are talking with medical professionals who aren’t open to cannabis as a treatment, how do you talk to them about cannabis?

NR: My arguments are more anecdotal, and involve stories where I’ve seen how it has helped. Think about how CBD has helped kids with seizures, or how well it works for some people who suffer from anxiety or a number of other ailments.  It’s hard because I come from a medical background: I understand the struggle of the physicians because they don’t understand it, they don’t know how to prescribe dosages. I can sort of sympathize with that.  I also use studies coming out of Israel, or one of the many coming out of Canada.  That’s usually what I cite.  Israel has done an amazing job with research around medical cannabis, but for some reason people don’t recognize it.